MORISIKA: THE STORY OF THE BOATMAN

It began one winter morning by the banks of the Brahmaputra in Tezpur, Assam. Enveloped by thick fog, one can’t see where the river ends and the sky begins. The was a muffled silence interrupted by bird calls and the sound of the river. Suddenly, we heard a voice in the distance singing. A break in the fog and out came a small boat with a man in a red sweater rowing and singing. There he was, an elderly fisherman from the fishing village singing a song about the river passed down from mother to son. A song that lives only in his memory and nowhere else now.  We met him as he pulled up his boat to the river bank and thus began the journey of Morisika; The Story of the Boatman.

The Brahmaputra River is the sculptor of Assam’s landscape. Its historical identity is inescapably connected to both human and natural actions. With a mind of its own, the Brahmaputra has a life beyond its waters. Thus, it demands that a biography of a river of such a magnitude is recorded holistically, emphasising the interdependence of life and landscape. (Arup Jyoti Saikia, The Unquiet River, 2019 & Isenberg, The Oxford Handbook, 2014)

Brahamaputra Basin and its lower reaches

It began one winter morning by the banks of the Brahmaputra in Tezpur, Assam. Enveloped by thick fog, one can’t see where the river ends and the sky begins. The was a muffled silence interrupted by bird calls and the sound of the river. Suddenly, we heard a voice in the distance singing. A break in the fog and out came a small boat with a man in a red sweater rowing and singing. There he was, an elderly fisherman from the fishing village singing a song about the river passed down from mother to son. A song that lives only in his memory and nowhere else now.  We met him as he pulled up his boat to the river bank and thus began the journey of Morisika; The Story of the Boatman.

People have memories and those memories become stories as time goes on. These stories bear witness to lives steeped in tradition, culture and knowledge systems that are invaluable and become the basis of collective memory of a specific community or culture. Morisika; the Story of the Boatman, a pilot of the River Project is an attempt to record these precious memories to chart out a biography of the mighty Brahmaputra. It is an immersive collaborative exercise with specific communities to record extensive archival material through different forms of storytelling. Riverine communities for centuries have been passing down lore, cultural traditions, music and oral histories inherited from their ancestors. Embedded in these are a storehouse of traditional knowledge systems of landscape and ecologies in and around the river that provide historical and relevant insights into the river system itself. A change in the seasons dictate the very nature of the river and the traditional practices of riverine communities. As soil erosion, deforestation, landslides, dams and increased flooding changes the Assam landscape at an alarming rate, it is imperative to archive and build a record of sustainable practices informed by centuries of wisdom shaped by the Brahmaputra. Previously undocumented or very little-known stories are slowly fading away from living memory as the younger generation assimilates into a modern and more fragile world. The objective is to build a multimedia archive in local languages that are recorded in collaboration with communities and handed back to them as a historical record and educational tool.

Riverine communities for centuries have been passing down lore, cultural traditions, music and oral histories inherited from their ancestors.

As part of the pilot, we worked with three communities in Upper, Central and Lower Assam. In Upper Assam, close to the Arunachal Pradesh border three major tributaries; the Dibang, Siang and Luit enter Assam to form the Brahmaputra. This has shaped the human interactions in the region. It is therefore a location of great importance in an exercise of documentation and archiving the river’s human and ecological history.  Temporary sandbanks or chars as they are locally known are unique phenomenon of the Brahmaputra. Chars are unstable and regularly change their location, size and shape depending on erosion or deposition of sediments. Rising and sinking is part of their life cycle, but they gain a sense of permanence once vegetation covers them. It is here, that, there is a rich, centuries old cultural tradition of nomadic Buffalo rearing pastoralists whose very lives are dependent on the moods of the river. Historically, the cultural and economic identity of the Upper Assam region has been shaped by these migrating pastoralists. Primarily of Nepali and Assamese ethnicity, they established what is known as the “Khuti’ system of dairy production for nearby villages and towns. A once booming economy of milk, curd and ghee production, there are very few Khuties left that not only still follow the older practices of Buffalo rearing but are also second or third generation cattle rearers. These pastoralists are a classic example of climate resilience as they are conditioned to adapt to extreme weather patterns. As Morisika follows one of the last few remaining pastoralists, we discover that the course of the Dibang has shifted just in the last year and is now slowly eroding the sandbar that they live on. The sandbar or Tapu, as an elderly pastoralist tells us was previously farmland and was cut away during a similar shift in the course of the river in the 90s and deposited as a char in the middle of the river.  The farming activities ceased as the land was no longer arable, grasslands sprung up and it became ideal temporary grazing grounds. This phenomenon is one of the few remaining in living memory. It provides useful insights into not only their migrating practices but also the historical shifts that dictate the very trajectory of the river itself and its impact on livelihoods.

In Tezpur, in Central Assam, we spend time with two village elders of a fishing village by the banks of the river. A fishing village established in the early 19th century, the elders have not only witnessed varied flooding patterns over the past few decades but are also brimming with stories and songs that chart out changes in the biodiversity, seasonal patterns and sustainable fishing practices. One of them recalls fondly of the house built by his father for his mother during their wedding. A house that used only materials suitable and available back then such as wood from specific trees found by the Brahmaputra. The house is still lived in by him and his extended family and is a visual record of a sustainable form of architecture that stands in sharp contrast to the cement houses slowly popping up in the village that are unsuitable for the weather conditions in Assam. He also describes how his father used to patrol the river during the summer months while it was breeding season to ensure that fishing wasn’t allowed in those waters.  Another elder sings songs for us that were passed down by his mother to him that describe a fisherman’s dependency on the river. He recalls fondly of Durga Puja festivities that used to be held decades ago which included a huge feast brimming with different types of fish no longer found in those waters due to increased silting, sedimentation and unsustainable fishing methods.

Gauripur- Dhubri, in Lower Assam is very close to the Bangladesh border. The river here leaves Assam and enters Bangladesh. A multi ethnic, syncretic relationship between communities based on centuries of co-existence and assimilation is the basis for a rich cultural tradition that consists of music known as Goalporiya Lokogeet and Bhatiali, theatre and other performing arts. These folk forms reflect a deep relationship with the land, forests and river that the communities are dependent on. We spend time with one of the descendants of the zamindari family who founded the town Gauripur back in the 19th century under the patronage of the royal house of Cooch Behar. A keeper of his family’s records and a propagator of the arts, he leads us down a palace full of memories and music that hark back to the British era. Steeped in tradition and myth, the rituals of Durga Puja organised by him date back to the very founding of Gauripur and the practice of most of the rituals taking place in the Brahmaputra is a phenomenon unique to Gauripur. In these customs, the river is neither romanticised or worshipped but is held in respect for its life giving as well as disruptive nature. We are learning that many of these traditions have a way of embracing both the good and bad and celebrate nature as itself instead of trying to contain or change it.

A fisherman on the Brahmaputra in the winter in Tezpur, Photo: Debashish Nandi

Whether it is visual or aural, stories of the river contain within them intangible forms of cultural heritage that hold a wealth of knowledge passed down from older to younger generations. It is constantly recreated and evolving as is individual and collective memory; thus ensuring a sense of identity and continuity. It is shaped by the natural environment and landscapes. They hold valuable information that are under threat of disappearing if left undocumented. Story telling has a way of penetrating the consciousness and communicating themes, facts and a timeline of events that ensure active engagement by the listener or watcher. They also tend to more interactive and cut across barriers and boundaries. In an increasingly globalised world grappling with wars, a climate emergency and an economic crisis, these forms could serve as a document to help us work towards a more sustainable and harmonious future.

Another elder sings songs for us that were passed down by his mother to him that describe a fisherman’s dependency on the river.

The River Project and its pilot Morisika; The Story of the Boatman has been conceptualised and created by Debashish Nandi and Vandana Menon. It is a collaboration between film makers, photographers, folk artists and local riverine communities in Assam and Arunachal Pradesh. The core team comprises of Vandana Menon, Debashish Nandi, Arghadeep Barua and Gaurab Talukdar. The archive is slated to launch by the end of 2023. 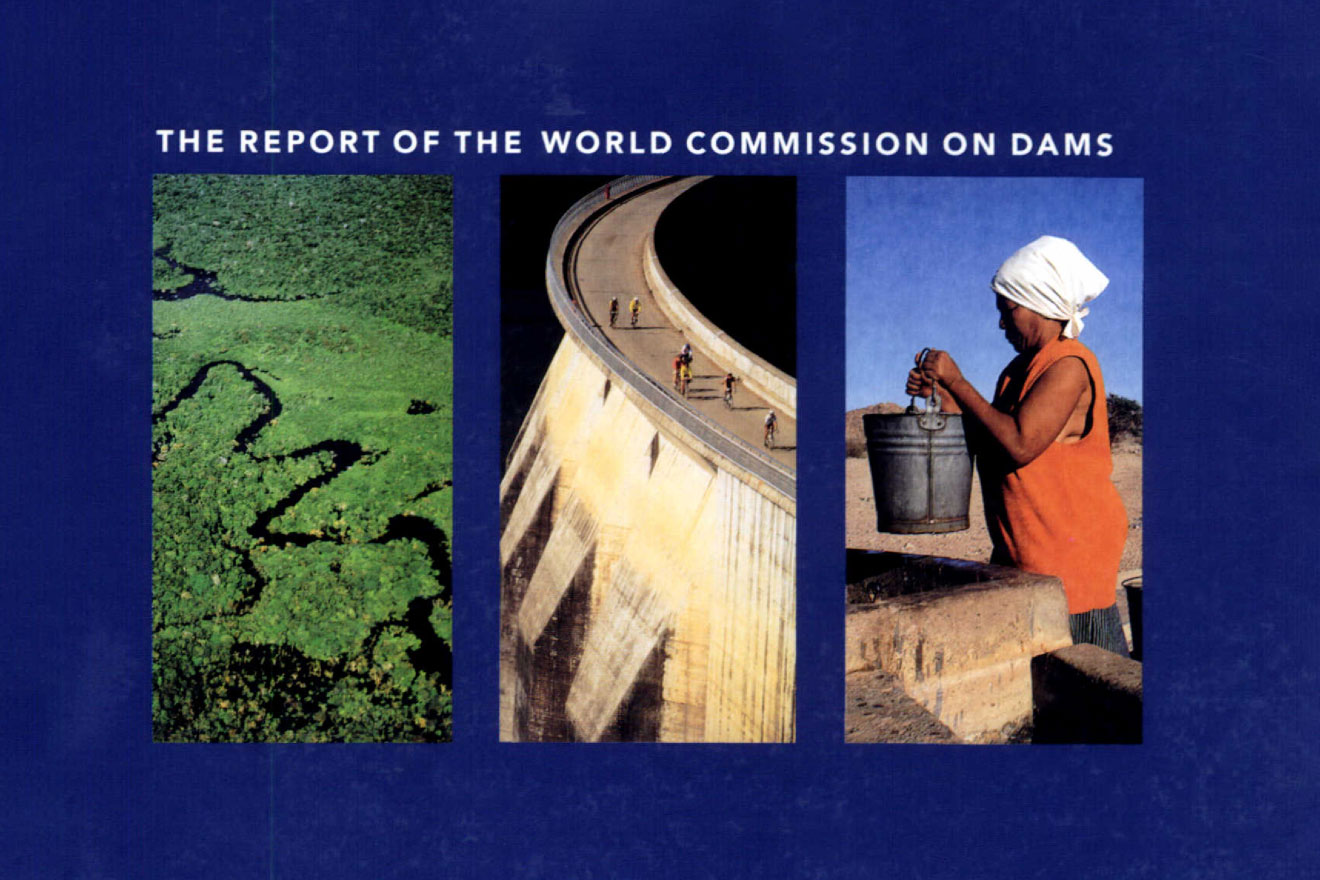 The World Commission on Dams: then and now